All children and adolescents in Scotland are able to obtain all their dental care from the NHS free of charge until their 19th birthday.  For many years the prevalence of dental caries in Scottish children has been higher than in England.  In the early years of the current century, the Childsmile initiative was launched to address this problem.

Childsmile is a national programme designed to improve the oral health of children in Scotland and reduce inequalities both in dental health and access to dental services. It is funded by the Scottish Government (Macpherson et al 2010). It commenced as pilots in 2006, and since 2011 has been delivered as an integrated programme in all Health Board areas throughout Scotland. Childsmile is a complex public health intervention and aims to adopt a common risk factor approach, recognising the importance of multidisciplinary and multi-settings approaches – integrating oral health with other groups and agencies.  It combines targeted and universal elements, adopting a proportionate universalism approach, aiming to provide a comprehensive pathway of care, with the intensity of support related to needs at the individual and community level. Childsmile attempts to address the social determinants of health using a combination of upstream, midstream and downstream interventions (Macpherson et al. 2018).

The programme also follows the principles of the national approach in Scotland for supporting the wellbeing of children and young people and improving outcomes by offering the “right help at the right time from the right people.” This is known as Getting it Right for Every Child (GIRFEC) and supports young people and their families to work in partnership with the services that can help them (Scottish Government 2017).

An important part of the work is that of  Dental Health Support Workers and the links to primary care via Health Visitors, to community agencies and to the third sector.

It is envisaged that every child in Scotland will, from birth, have access to Childsmile.

Directed support targeting children and families in greatest need through:

* priority nursery / school settings defined by children being from the most socioeconomically deprived communities.

Childsmile is a publicly-funded health improvement programme and is subject to a full evaluation to assess whether or not it works and which parts are most successful.

The Childsmile programme has had significant achievements and been associated with major improvements in child dental health over time. However, socioeconomic inequalities persist, with children from the most deprived backgrounds bearing the greatest disease burden. A new national Oral Health Improvement Plan has recently been published (Scottish Government 2018) and sets the future direction for the programme to expand.

The future direction of the Childsmile programme includes: i) optimising the delivery of the existing programme through lessons learned from the evaluation, this will include a focus on vulnerable groups (e.g. children looked after by the state; McMahon et al 2017); ii) further community development work, this will include further work with the third (NGO) sector, social prescribing / linking with ongoing community-based initiatives; iii) influencing policy and programmes (“upstream”), including common risk work as part of the Non-communicable Disease (NCD) agenda (e.g. obesity / sugar strategy).

Much of the material presented in this description comes directly from the Childsmile website and from Macpherson L, Anopa Y, Rodgers J, Conway D. Childsmile – the national child oral health programme for Scotland. Transformative Education for Health Professionals. WHO Guidelines. Case Studies. March 2018 https://whoeducationguidelines.org/content/childsmile-%E2%80%93-national-child-oral-health-improvement-programme-scotland.  The Oral Health Working Group of the World Federation of Public Health Associations thank the Childsmile team for permission to reproduce the images and some commentary in this brief description. 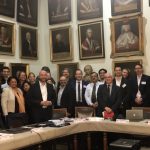